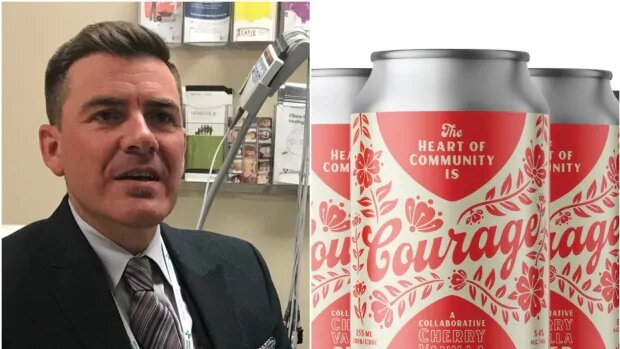 A top Alberta addictions specialist is calling on a Calgary health clinic, known for its addictions work, to withdraw and apologize for its new fundraising campaign that sells alcoholic cider.

Dr. Robert Tanguay, a psychiatrist who specializes in addictions and pain, is the provincial medical lead for opioid dependency treatment training for Alberta Health Services (AHS). He also co-leads a rapid access addiction medicine program with AHS at another Calgary clinic.

He said he was taken aback when he first saw The Alex Community Health Centre promoting alcoholic cider.

“It’s kind of like an exercise program advertising cigarettes out front,” he said.

The Alex has now partnered with SunnyCider, a nearby craft cidery, to produce a sour cherry vanilla alcoholic cider. It sells for $16 for a four-pack, with the proceeds earmarked for the health centre. The cider is called “Courage,” to recognize the clinic’s health-care workers.

The clinic’s leadership says the money raised will go toward buying food hampers for those struggling financially during the pandemic.

Tanguay, however, said that although the fundraiser is for a good cause, it can still stigmatize patients struggling with addiction to alcohol.

“At the end of the day, the Alex program itself is an excellent program but it was certainly shocking and not just to me,” Tanguay said.

“It seems a real significant conflict of interest to be claiming to be an addiction program and also advertising on alcohol.”

Tanguay said he thinks the centre’s leadership should “retract and apologize.”

“I think that we all know people make mistakes and we’re a small community of providers that often work hand in hand and have great relationships together,” he said. “But this one, this is a big head scratcher.”

The Alex’s leadership team is getting ready to release a video advertisement to promote the cider and the Courage message.

CEO Joy Bowen-Eyre said the cidery approached the clinic during the pandemic, looking to help. The company came up with the campaign, she said, and also made T-shirts and bandanas with the campaign’s slogan.

If people don’t drink alcohol, Bowen-Eyre suggested they buy one of those products instead.

“I think in these unprecedented times that we find ourselves, when you have a small business in Calgary who wants to reach out and help their fellow neighbour who is supporting the vulnerable sector, we are taking the proceeds of the money from the cidery,” she said.

Bowen-Eyre said she didn’t think the campaign would negatively affect patrons, and instead said more donors have come forward since seeing the cider-can advertisements.

She instead called the campaign “a feed-good story” that recognizes the courage of staff and patrons to give and seek help during the pandemic.

Tanguay said he tries to support local and thinks the overall message of Courage, meant to recognize front-line health workers during the COVID-19 pandemic, is a good one.

But he noted that The Alex is well-known and respected in the medical community for its primary care rapid access addiction medicine program, and he noted the centre does a lot of addictions work in Calgary shelters and drop-in programs.

He says addictions programs typically follow an “unspoken rule” to not accept funding or advertising from companies that sell addictive products, whether that be gambling, tobacco, cannabis or alcohol.

“Imagine if they had Marlboro all over the place,” Tanguay said. “That would kick up a huge fuss. But just because it’s a local brewery doesn’t mean it’s OK.

“You can’t go around telling people that you’re an addiction program and then go around being sponsored by, quite simply outside of tobacco, the most addictive substance in our culture and the one that leads to the most deaths,” Tanguay said.

A report from the Canadian Institute for Health Information found that Alberta had among the highest rates of alcohol-related hospitalizations in the country in 2015-16, with the province performing worse in rural areas.

Apart from his work with the opioid dependency treatment training for Alberta Health Services, Tanguay works as an addictions consultant for the provincial health agency.

“There’s no chance that our AHS programs would even think of doing this,” Tanguay said. “I think the easy answer is, ‘No, but thank you.'”